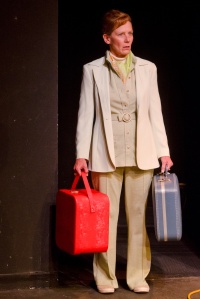 Through a mess of beer cans and busted typewriters, two brothers – one a screenwriter, the other a distraction – attempt to pen the next great Hollywood Western. Shepard’s rambunctious story of sibling rivalry, Hollywood’s siren song, and the battle between art and business is played out as both brothers wrestle for top dog status. Pulitzer Prize, Obie-winning playwright Sam Shepard’s myth-based intelligence and renegade wit cut loose in this funny, searing play

From The Oregonian:
“Their sibling rivalry veering back and forth from the edge of terrifying, actors Kenneth Baldino as Austin and Matt DiBiasio as Lee hold their own as the brothers in this production by Our Shoes Are Red/The Performance Lab.”
From the Willamette Week:
“Director Devon Allen plays up True West‘s dark undercurrents. That’s not to say she forgoes Shepard’s prickly comedy: Austin looks lovingly at his gaggle of stolen toasters as if preparing to read them a bedtime story. But the production acknowledges the play’s thematically expansive nature, as well as its fundamentally claustrophobic environs.…there are moments when the performance seizes you”

From The Portland Mercury:

It can take a lifetime to earn a reputation but only a few well-placed whispers to destroy it. Shakespeare’s compelling tragedy exposes how jealousy and envy fuel our desire to destroy the very thing we covet. Gossip, rumor and a stolen handkerchief lead to the brutal murder of innocence in one of Shakespeare’s finest plays. 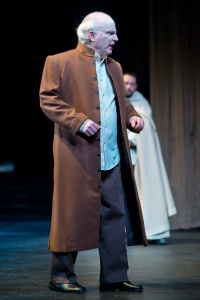 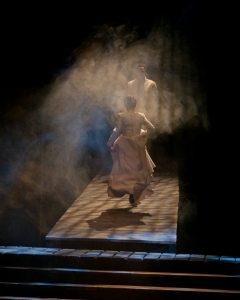 Featuring: Dennis Kelly
A hypnotist’s act is falling apart-three months prior he hit and killed a little girl with his car.

The grief-stricken father of the girl believes that an oak tree at the accident’s site has become his daughter. He visits the site every evening,  jeopardizing his marriage and his state of mind.

Seeking redemption, ‘The Hypnotist’ and ‘The Father’ meet onstage for the first time since the accident.
Both are transformed, and transform us.

Here is where the play becomes brilliant – every night a different actor from Portland’s theatre scene plays ‘The Father’. 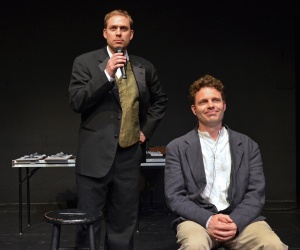 REVIEWS OF AN OAK TREE

Carol Wells, The Oregonian
“We feel a closeness to the situation…and we are therefore granted
full access to the final expression of guilt and grief.”

From Alison Hallett’s 2011 theatre highlights:
“Most Meta – Our Shoes Are Red/The Performance Lab’s An Oak Tree featured a play within a magic show within a play, and cast a brand-new actor every night. Did your brain explode yet??”

by Will Eno
directed by Devon Allen

A delightful, soulful look at the peculiarities of our inner and outer lives, these five short plays combine to reveal the glorious terror of being human. A cast of characters including a coach, an airline representative, and a team of photographers try to make sense of both trivial  and universally overwhelming shortcomings in this series of vignettes by Will Eno. 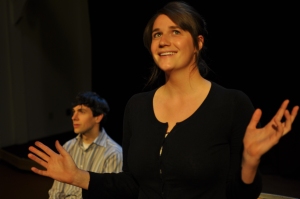 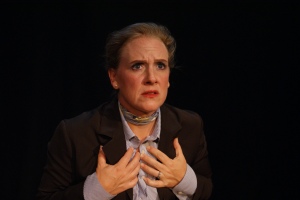 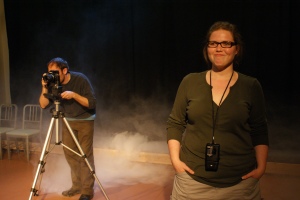 REVIEWS OF
OH THE HUMANITY

Ben Waterhouse, Willamette Week
“I found the show uplifting, a strange reassurance…Director Devon
Allen has pushed the cast toward a wide-eyed earnestness that is both compelling and absurd.”

Allison Hallett, Portland Mercury:
“For a show that barely clocks in at an hour, it has impressive emotional heft – Eno’s writing has a cumulative build, systematically knocking out the audience’s defenses over the five-part show. The Performance Lab does an outstanding job with the script, not least because the casting here is just about note-perfect – without actors willing to leaven the script’s self-seriousness with humor, the show could easily feel like an acting-class workshop. Through this performance, though, runs an assuredness that bespeaks the understanding that oblique approaches like humor and self-consciousness are often more impactful than direct emotional appeals.
Like the sudden death of a loved one or an accident narrowly averted, Oh the Humanity left me more acutely aware that I’m alive. You can’t ask much more from art than that.”

Allison Hallett, Portland Mercury:
“One of last year’s theater highlights was Our Shoes Are Red/The Performance Lab’s production of Will Eno’s Oh the Humanity. That show was one of those rare instances of live performance transcending entertainment to become something more appropriately characterized as “art.” (There’s nothing wrong with entertainment, of course. But a little art every once in a while is nice, too.)”

Three young men from a seaside town journey back to one fateful weekend of an embarrassing episode at a college lecture, a night of partying gone horribly wrong,  and the retribution- fueled robbery that tied the men together. Gorgeous language and three compelling characters are all that is needed in McPherson’s vibrant, haunting play. 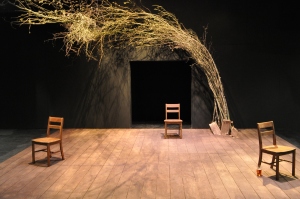 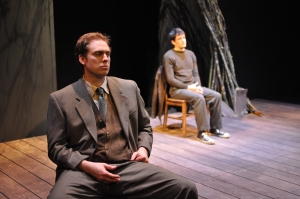 REVIEWS OF THIS LIME TREE BOWER

Allison Hallett, Portland Mercury:
“This Lime Tree Bower is a decisive reminder that good theater doesn’t
require bells, whistles…Lime Tree grabs and holds the audience’s
attention with only the barest trappings: minimal staging and three
actors with the poise and presence to command a room for 90
minutes…The deftness of these performances – coupled with McPherson’s
bawdy yet heartfelt script – make for a unique show.”

Ben Waterhouse, Willamette Weeke
“These intertwined stories are a gold mine of narrative treasures: a bookie whose nephew’s head is too large and face too small; strange, sexually ambiguous dreams, which are recounted without any attempt at interpretation; a shipwreck, possibly haunted; a sleazy disco decorated in pink neon; apocalyptic sexual fantasies; a miserable German philosopher who believes language is dying (a notion McPherson handily destroys). McPherson, never content to tell just one story, gives us a lifetime’s worth, filling out his little world like a sinister doll house. But for all these delights, This Lime Tree Bower would be a bore without some excellent acting, and CoHo’s production, directed and co-produced by Devon Allen and Our Shoes Are Red, delivers.”

Marty Hughley, Oregonian Live:
“The characters speak directly to the audience in tones that blend the conspiratorial with the confessional, with Ray sprinkling in a raconteur’s roguish charm. And the sense of connection and affection that eventually emerges between them is subtle yet unmistakable, a reflection of the play’s thematic concern with the effects of experience and memory. It easily could be too static to hold your interest, but instead turns out to be sharp, very funny, and moving in small yet not insignificant ways. Partly that’s due to McPherson’s writing, which is loaded with vibrantly colorful obscenities, but also odd little details, such as when Joe recalls being questioned by police then offered “a cup of tea — and a Kit Kat,” or when Frank gripes about a customer who always asks for “red sauce — which the rest of us know as ketchup.” But it couldn’t work without performances forceful enough to establish some momentum yet understated enough to fit the narrative’s meandering charm.”

By Howard Barker
in association with TASO
Directed by Carolyn Holzman, Josh Spencer and Devon Allen 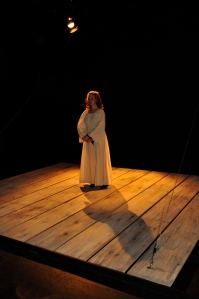 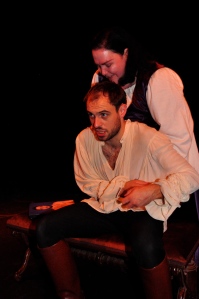 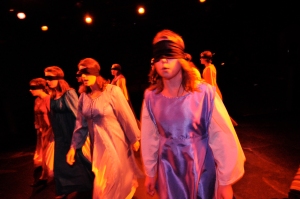 Will Gardner, Portland Mercury:
“Much weight in the play is given to Placida’s powerful speaking voice – “nothing it proposes can be denied” – and Allen possesses such a voice. Matthew DiBiasio as Prince Lucas is similarly commanding….
Again, I look forward to another production by the Performance Lab. Their hard work is apparent here – from the multi-functional art direction to their dedication to (undeservedly) under-produced playwrights.”

Ben Waterhouse, WW:
“The cruelty of the story and difficulty of Barker’s writing make Ursula a difficult play to like, but this production, co-directed by DoJump founder Carolyn Holzman and recent PSU grad Joshua Spencer, has some merit. It takes a while to get going, but as DiBiasio and Allen warm up their fearsome voices and the collision of lust and piety escalates, the situation onstage becomes genuinely terrifying.”

Telling of a childhood gone sour and a young man barely stumbling into adulthood, Thom Pain (based on nothing) shows the havoc that wounds can wreak. The bewildered child’s course invites heartache and undeserved solitude, reminding us that life is indeed marked with passages of astonishing awe, intrinsic mystery, and impasse.

But  don’t be fooled, underneath it all it’s really just that good old fashioned one-man existential stand-up comedy act that we all know and love. 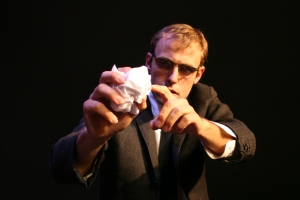 REVIEWS OF
THOM PAIN (BASED ON NOTHING)

Marty Hughley, The Oregonian:
“And so I wish to avoid overselling the production that Our Shoes Are Red/The Performance Lab opened Thursday in order not to burden it with the kind of expectations that lead an audience to feel let down. Yet at the same time, I want to declare it unmissable, a transfixing performance of a brilliant script, at once the weirdest and the most deeply human experience you’re likely to find in local theater this season…For the actor, it’s like an obstacle course on a tightrope. Matthew DiBiasio pitches the character perfectly, somewhere between an intellectual cartoon teasing you with rhetoric and an all-too-real human yearning for a connection he’s too damaged to manage. With a stiff-legged gait, jutting lips, gestures as sharp as semaphore, he darts and weaves from ironic detachment to tenderness to anguish to bitterness and back. Admirably precise and almost unnervingly committed, it’s a remarkable performance. Not to oversell it, of course.”

“Sometimes, great things get overlooked. Take, for example, a production of the Will Eno play, Thom Pain (based on nothing) last year. Playing in a tiny theater in Lincoln Hall, it got lost in the September crush of the Time-Based Art Festival and season-opening extravaganzas. But it was one of the most absorbing theater offerings all last year. It’s hard to imagine that version could have been much better than the production here by Our Shoes Are Red/The Performance Lab, which is being re-staged in a burgeoning suburban center but still with Matthew DiBiasio’s remarkable emotional precision under the scrupulous direction of Devon Allen. Here’s hoping the lost gets found by many.”

Will Gardner, The Portland Mercury

“Although Thom Pain is simultaneously metaphysical and existential, I feel like it’s incorrect to label it as such. For one, this performance isn’t, despite involving possible profundities, heavy. What’s more, I didn’t really absorb the play’s ramifications until hours later. While watching, I realized that- again, like The Flu Season – Thom Pain discusses something indistinct and simple, but in no way inconsequential. I didn’t dissect it then; I was simply enjoying watching a bespectacled, anxious man regale his audience with anecdotes about childhood bee stings and lost loves.
Of course, a solo show hinges on the performance of its actor. Matthew DiBiasio, as Thom, infuses his character with the necessary credibility. It’s not your usual monologue; the role requires impeccable timing, and DiBiasio’s got it. When less-competent actors star in meta-shows like Thom Pain, the play often drowns in its own self-awareness. DiBiasio was good enough that it even seemed like improv.
Though this is the first play I’ve seen by the troupe called Our Shoes Are Red/The Performance Lab, who recently relocated, their future appears promising. Not only was Thom Pain a good show, their upcoming projects – featured playwrights include David Harrower and Samuel Beckett – are intriguing. Further, the Lab’s approach to drama is admirable. Very collaborative and inclusive, the group’s aim is to provide an innovative perspective on theater. Many theater troupes strive to achieve this simple credo; Our Shoes Are Red, lacking the pretension that befalls many ensembles, seems capable of pulling it off.”